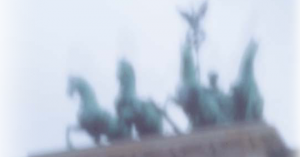 The Cloud Of Witnesses

In June 1939 the fade of a German Pastor has been decided in New York as he determined to refuse to serve in the army if he were drafted. This meant he would be sentenced to death. Friends from the US invited him in order to safe his live. They organized a series of lectures and were convinced that he would survive the upcoming war in America. But the theologian felt responsible for his friends and his students in Germany. Finally he decided to take the last ship home to Europe. We don't know why Dietrich Bonhoeffer wasn't drafted into the army after his return from New York. His important role in the German Resistance has often been illuminated. The unity in word and deed in his life is inspiring for people all over the world until today.

The docudrama The Cloud of Witnesses wants to set focus on an aspect so far less noticed. In 1939 Dietrich Bonhoeffer went to New York for the second time. From Fall 1930 to Summer 1931 he studied at Union Theological Seminary. Here among others he met Jean Lasserre. He should have seen the arch-enemy in the French man but they became friends and discussed the „Sermon on the Mount”.

On December 11th 1930 Dietrich Bonhoeffer wrote from New York to Helmut Rößler: „my hope of finding Heb. 12,1* fulfilled here has been bitterly disappointed.“ (* Heb 12,1: “Therefore, since we are surrounded by such a great cloud of witnesses, let us throw off everything that hinders and the sin that so easily entangles, and let us run with perseverance the race marked out for us.”)

This qoute refers to the situation of the Church in America, „which, without suspecting it, is now smiling in desperation.“ In Harlem, where his friend Albert Franklin Fisher took him, he finally met the The Cloud of Witnesses. Here Bonhoeffer learned about white supremacy, from the perspective of the Black. Not only did he visit Abyssinian Baptist Church but he worked there, for example he taught in Sunday School.

In 2014 Dr. Reggie Williams published a book about Bonhoeffer and his experience in Harlem „Bonhoeffer's Black Jesus“. (His book was the inspiration for this film and is the source for the facts in the next two passages.)

After World War I many Afro-Americans migrated to the North, were they found work and earned more money than in the South. In the Southern States lynchings were common. Between 1880 and World War II more than 4.700 lynchings happend in the USA, 73 % of the victims were Black. During that period of time 3.245 Black were killed by Whites in the South.

As all Blacks the members of the Abbessinian Baptist Church had been hit very hard by the great depression the year before Bonhoeffer arrived. At the same time a New Black cultural awareness arose in music, painting and writing. Bonhoeffer read many books of the “Harlem Renaissance“. He even wrote an essay about them, which has been lost. In the Bonhoeffer archive at the Staatsbibliothek zu Berlin is a list of books of the “Harlem Renaissance“ and there are quotes and other references in his writings and we know the list of books he had to read for a seminar at Union Theological Seminary. Furthermore Bonhoeffer collected records of spirituals. Later he played those to his students in Finkenwalde. His experience in Harlem changed him and his theology that later had such an important effect on the liberation theology in South Amerika and South Africa.

Four years after Dietrich Bonhoeffer 'studied' and wrote about American racism, the antisemitic Nuremberg laws become laws in 1935. James Q. Whitman, Professor in Yale has proven in his book “Hitler's American Modell“ that the Nazis studied American race laws. They took them as a model for marginalization and outlawing the Jews. This open state racism should not be confound with the holocaust. In November 1937 Joseph Goebbels had claimed:“ We must get the Jews out of Germany, out of Europe.“ Followed by the first deportations to Poland and the November pogroms. In Summer 1939 Dietrich Bonhoeffer travels to New York again...

This film is about Bonhoeffer's decision to return to Germany in 1939 and it is about his formative experience on his first stay in 1930/31. In our documentary we want to tell how Dietrich Bonhoeffer became such a determined opponent of suppression. In addition we are interested in the question which influence his live and theology has in- and outside Germany until today.

If you like to read more about Dietrich Bonhoeffer in New York during the Harlem Renaissance, you can read the revised English-language version of my conference presentation originally delivered in German (Berlin, Germany, October 2018). Click here to open or download the PDF.